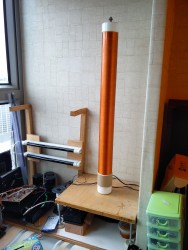 This is a Remnant of The Past, the first project that started my journey on the road of electronics. The thing you see above is the first Tesla Coil I ever built, and the first project ever having to do with electronics. This project started sometime after I started my first year in high school, looking back it has already been 5 years since then. It all started when the younger me had watched END_OF_DOCUMENT_TOKEN_TO_BE_REPLACED

Well all of you know that the Divergence Meter runs on Magic Smoke right? Well somehow today for some reason it has let it out…. After running for 3 months or so continuously on a plug-in Power Supply, I wanted to change the batteries and bring it outside for someone to see. And so I did. After leaving from a  show and tell session in which it ran somewhat perfectly, the voltage regulator namely the TPS62160 5V DC-DC converter IC turned red hot and poof…..*insert poker face* well I don’t know the cause but all I know is that it broke and I have to fix it….or remake the main circuit board altogether. Thank god I designed it with a somewhat modular design or else I would have to replace the whole freaking thing =___=

Well if you look closely you can see the molten blob of metal where it burned red hot 🙈 and wow I really didn’t notice the amount of flux still on the board :/ I’m pretty sure I washed it all off with alcohol and water after baking…well anyways I definitely can conclude this is the organizations doing….

END_OF_DOCUMENT_TOKEN_TO_BE_REPLACED

All the circuit boards are finally assembled!!! And I only can say THEY WORK!!! 😀 Though of course there are some parts of the design which make me think about my design skills :/ well pictures first!

END_OF_DOCUMENT_TOKEN_TO_BE_REPLACED

So exams are done and hell that was crazy, 2 weeks of painful mind torture XD anyways today the Nixie Board of the Divergence Meter is finally assembled >.< !!!!!

Here are some pics 😀

Here we have the front view, nothing really special. Though the female pin headers had to be filed down a bit so that it would fit the height constraints and that’s why they look like that, but the electrical contact and tightness is still great. I didn’t really clean the board before taking a photo so uhh….deal with it :p